Many congratulations to all those in Group 38L who have successfully passed their Worshipful Company of Farriers Diploma; the culmination of 4 years hard work!

Don’t forget Stromsholm offer amazing packages and discounts for newly qualified farriers – do not miss out! These deals are designed to support you in establishing your career and new business. Call and speak to our Sales Team on 01908 233909.

We continue to be impressed with the nominations received from the colleges for the Stromsholm College Block Award. This award is presented to highlight the effort made by an apprentice for a particular effort, overcome a difficulty or achieved an excellent standard. It is for the college to decide what the award is presented for and not all blocks will result in an award being made. We are however delighted to confirm –

The nomination for the Diploma group is Anthony Beardsworth whose ATF is Paul Gordon DipWCF. “Anthony produced a high standard of work in all areas throughout his apprenticeship.”

Tutors at Hereford have chosen to nominate Warren Day (ATF Bradley Greenham DipWCF, Field Officer John Ford RSS) for being the ‘Most Improved’. Warren was part of group 38L and has now completed his apprenticeship following successfully taking his WCF Diploma examination.

On behalf of all the Hereford School of Farriery, Holme Lacy, college tutors Alan Woodyatt AWCF and Danny Bennett AWCF Class 1 commented “in his final year Warren Day's practical shoe making and shoeing standards had been going backwards and the tutors were duly concerned, this is when the newly appointed College Field Officer John Ford came to the rescue.  From March this year (2018) Warren Day went to ATF Bradley Greenham (arranged by John Ford) for additional support in the forge. Warren also attended every Diploma preparation clinic organised and delivered twice a week by the Hereford college tutors, aimed at providing additional preparation for the practical, theory and oral elements of the Diploma exam being held in May.

Whilst there are many in Warren’s group who could also have been worthy nominees, Warren's determination to change his own fortunes and look to the people who could support him when left in a tricky situation paid dividends.  In the eyes of the college tutors this makes him worthy of the 'most approved' award for achieving a near distinction pass in his theory and achieving a good pass in the practical shoeing test to gain his WCF Diploma in May.”

Prizes have are being sent to the winners of these awards by Stromsholm. Many congratulations to all involved! 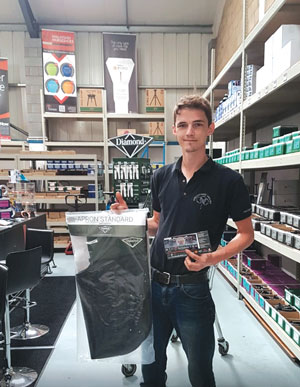 The winners of the monthly Apprentice Club Prize Draw is Jimmy Hill (April) (pictured right) and Thomas Stott (May)! Congratulations to you both. They have won a gift voucher to spend with Stromsholm and goody bag.

At the time of going to print we have three completed sets of result for the Apprentice Shoemaking League which includes Ayrshire Branch, Nottingham County and Devon.

Points in the Shoemaking League have been awarded to all those placed in the Top 6 in apprentices classes and the leader board, by college group, is as follows

Points are accrued at competitions across the country for apprentices securing places in the top 6 in apprentice shoemaking classes. Keep an eye on the Facebook page to see which competitions are included and who is in the lead!

The Stromsholm Apprentice Farrier Club is free to join and is here throughout your apprenticeship. If you haven’t already done so do visit the website to do it now and claim your free goodies! (http://www.stromsholm.co.uk/apprentice-club-4-w.asp).