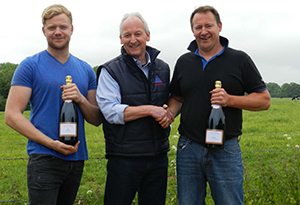 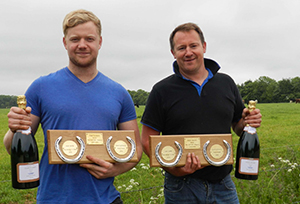 The Victory Magnum is awarded by Atlantic Equine, UK distributors for the Victory Racing Plate Company of Baltimore, USA, to the farrier(s) plating the most Grade One, big handicap and Cheltenham Festival  winners in Victory aluminium racing plates.

The two farriers shoe for Dorset racehorse trainer Colin Tizzard, who had a stellar 2015/16 season winning seven Grade One races.

The very popular Cue Card won the Betfair Chase at Haydock, the King George VI Chase at Kempton and the Betfred Bowl at Aintree. New star Thistlecrack won the Long Walk Hurdle at Ascot, the World Hurdle at Cheltenham and the Liverpool Stayers Hurdle at Aintree. And to cap it all, Native River won the Mildmay Novices Chase at Aintree.

In addition to their magnums of champagne, each farrier also received a unique trophy mounted with one of Cue Card’s Victory racing plates and one of Thistlecrack’s.

The trophies and magnums were presented by Tony Lindsell, a director of Atlantic Equine, on Wednesday 1 June.

“Colin Tizzard’s Venn Farm Racing have been good customers for a long time. They have had a fantastic season and I am delighted that Nick and Tom have been able to win the Magnum this year for a smaller yard,” said Tony.

Nick Heath, from Catsham,  is in fact a former  winner of the Victory Magnum, having won it when working with farrier Gary Hooper (who sadly died in a motorcycle accident) for Paul Nicholls way back in 1999 in the year that See More Business won the Cheltenham Gold Cup.

“I started shoeing for Colin Tizzard when he just had two hunters,” said Nick. “He got some  point-to-pointers for Joe (son of the trainer and former  jockey) to ride; then he started having a few National Hunt horses and the rest is history. I’ve always used Victory plates – they’re easy to fit and easy to win with!”

Tom Clarke, from Compton Martin, was apprenticed to Nick and only formerly qualified as a farrier on 1 March 2016. He is undoubtedly the youngest winner of the Victory Magnum in its twenty-five year history.

“I am proud and privileged to be shoeing some of the best National Hunt horses in the country,” he said.