< back to previous page

Jim, and his brother Allan, started J&A Ferrie in 1982 shoeing all types of horses and supplying farriers with shoes and nails, they also both lecture and give forging demonstrations worldwide. Here, Jim provides detail of the debilitating disease that is Laminitis.


"The coffin joint is the most distal joint in the horse’s muscular/skeletal makeup; consequently this joint comes under tremendous stress from the forces above and as a result is often a source of lameness.

Anatomy of the Coffin Joint


The coffin or distal interphalangeal joint is the intersection of the coffin bone with the short pastern bone and the distal sesamoid or navicular bone.

The joint is a hinge joint and also a saddle joint due to the unique shape of the coffin bone. The coffin bone and short pastern bone are joined medially and laterally by a group of ligaments known as collateral ligaments. The navicular bone is attached to the coffin bone distally by the impar ligament.

Two collateral ligaments also hold it in suspension. The deep flexor tendon uses the navicular bone as a fulcrum before its insertion on the solar surface of the coffin bone.

The junction between bones is called the joint capsule and from here the synovial fluid, which lubricates the joint, is secreted. The joint also plays a part in shock absorption during locomotion.


Viewed from the side, a line dropped from the centre of the coffin joint should divide the ground surface of the hoof into two equal halves.

The x-ray below shows the amount required to be trimmed in this unshod hoof to achieve a balanced coffin joint.

Note
The toe must be angled at 45º to the ground to facilitate this balance. If the wall were to be thinned parallel to the bone then the laminar attachment to the coffin bone would be compromised rendering the horse lame. 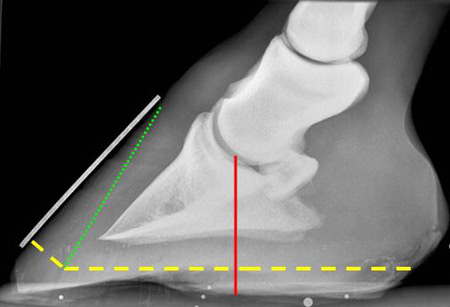 Locating the centre of the Coffin Joint without an X-ray 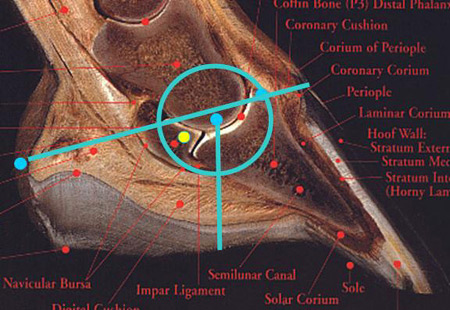 If this line is carried on to the solar surface of the hoof it gives the farrier a datum point around which the hoof should be trimmed or shod.

Each hoof is different, as the length of the frog is governed by the height of the heels.

Trimming around the centre of the Coffin Joint

The black line shows the centre of the coffin joint. The red line shows how much heel must be trimmed to achieve symmetry.

On this hoof the wall of the toe does not conform to what is perceived to be “NORMAL” and must be brought back even farther to achieve balance.

The reason for this type of hoof capsule is due to the conformation of the front limb. The knee is in a backwards position from vertical making a normal hoof pastern axis impossible.

The overhanging toe is blunted to achieve balance around the centre of the coffin joint - the green line shows where a conventional shoe might be placed.

Personally I like to shoe in three dimensions around the centre of the coffin joint. I believe that this is the centre of articulation and the whole horse pivots around this point on all four legs.

Consequently I use shoes with the ground surface rounded to minimize the stresses during locomotion.

Another method of achieving Dorso/Palmar Balance


This can be done with either a graduated shoe or a graduated pad between the shoe and the hoof. The shoe can be open heeled or a bar shoe .The disadvantage to this type of shoe is that the frog does not function properly and consequently the heels are lowered even more as the frog descends downward with each stride.

Some sort of frog support should be used with the graduation.( see pictures)


This should have a hoof packing on the solar surface to enable the frog to function.

Medio/Lateral Balance around the Coffin Joint


It must be remembered that we are not shoeing a table leg. The horse is a dynamic animal and we must observe it as such prior to shoeing or trimming.

Over a number of years and evaluating thousands of horses before shoeing, I have found that the accepted method of trimming (to the long axis of the forelimb) does not apply in a large number of horses.

This type of conformation will usually not normally present as a problem until maturity, when the elasticity of the joints cannot accommodate uneven ground contact, and the resulting loading on just one side of the hoof and limb causes lameness. This lameness initially shows as sore to turn in a tight circle and gradually worsens if the limb /hoof imbalance is not addressed.

I have a very simple solution to addressing the conformational problem, and that is to trim or shoe to achieve level footfall on a firm surface.

In the forelimb, a very slight lateral (outside) first ground contact is perceived to be normal.

During forward motion animals with an outward rotation between the knee (carpus) and the canon bone will usually toe out, break over to the inside and place the hoof outside the middle of the leg to land flat. This causes excess load on the inside of the leg and hoof. To address this problem, especially in a young horse in which the growth plates have not yet closed, I trim the hoof on a spiral which would see the outside lowered to allow normal footfall.

Often when the mature horse is lame with an outward rotation of a joint enough cannot be safely trimmed and level footfall must be achieved by making the spiral with a shoe.
Soundness is seldom achieved instantly, since so many structures in the leg have to be de-stressed, but over three or four shoeings in this manner normality should resume.

Much less common is an inward rotation of the joint , when trimming on a lateral spiral is beneficial.

Note
Sometimes unlevel footfall can be due to acute trauma to the hoof causing abnormality in the stride; this must be eliminated before adopting Spiral Treatment

< back to previous page