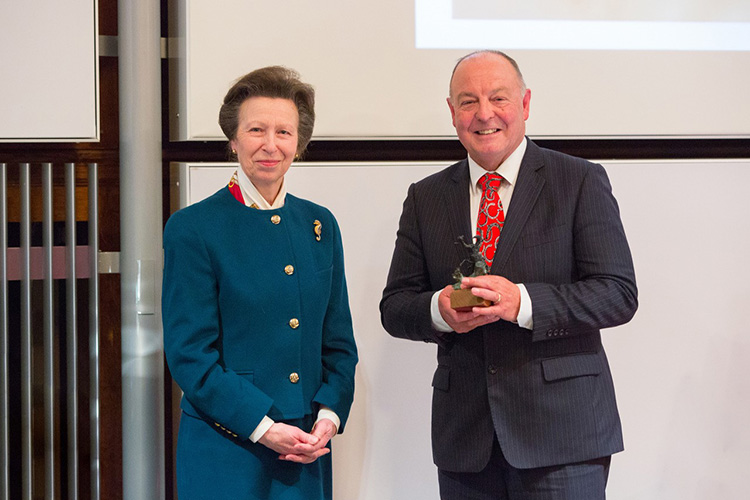 Dr Simon Curtis, a practicing farrier in Newmarket, Suffolk was announced as the winner of the Sir Colin Spedding Award at yesterday’s National Equine Forum (NEF), Thursday 8th March 2018. This special commendation was given in recognition of Simon’s exceptional practical and educational contributions to farriery over 45 years. Runner up was the British Grooms Association (BGA).

Dr Simon Curtis FWCF has been a practicing farrier in Newmarket, England for 45 years. He has lectured and demonstrated farriery in 30 countries on six continents including the USA, Australia, India, Russia, and Brazil. He has published three textbooks on farriery and has been published in numerous journals. Simon is the only farrier awarded an Honorary Associate by the Royal College of Veterinary Surgeons (2002). Simon continues to practice farriery, teach and write.

Simon said: “I am both surprised and delighted to have won the Sir Colin Spedding Award. I take it as a recognition that good farriery and increased farriery science is acknowledged as contributing to equine health and performance.”

HRH The Princess Royal, who is President of the National Equine Forum, presented the Award to Dr Simon Curtis. Her Royal Highness also presented a framed certificate to Lucy Katan, Executive Director of the British Grooms Association for its work in raising awareness of the role of the groom and of the importance of legal and good employment in the equestrian industry.

The Sir Colin Spedding Award was introduced in 2013 in Sir Colin’s memory. It is presented annually to an exceptional unsung hero or heroine of the equestrian world. Any individual or organisation from any equestrian field in the UK is eligible, as long as their outstanding qualities have not been formally acknowledged elsewhere.