< Back to previous page

Jim, and his brother Allan, started J&A Ferrie in 1982 shoeing all types of horses and supplying farriers with shoes and nails, they also both lecture and give forging demonstrations worldwide. Here, Jim provides detail of the debilitating disease that is Laminitis.

"LAMINITIS is a disease associated with ischaemia of digital epidermal tissues. The bond between the dermal and epidermal laminae (the inter-laminar bond) is the only means of support of the coffin bone within the hoof. Horses are suspended within their hooves by this interlaminar bond and if the laminar bond is destroyed; the pedal bone moves distally within the hoof capsule.

Laminitis can be Acute (actively Laminitic) or Chronic (had laminitis in the past but not painful presently).

Laminitis can be Rotational (the laminar bond has broken down at the dorsal region of the hoof and the coffin bone is pulled downwards by the deep flexor tendon) or Sinking (where a greater proportion of the Laminar bed is deprived of blood, and consequently nutrients, resulting in the coffin bone sinking downwards within the hoof capsule).

Obesity
The most common type seen in the UK.
Many horses and ponies do little work. Unless careful calorie controlled diets are provided these animals very easily become overweight. Native ponies and cobs are very efficient at metabolising quite low energy forage and are unable to cope with fertilized cattle pasture.

Hormonal
Some laminitis cases appear to be hypothyroid related.

Cushings Disease
Symptoms of Cushings disease in elderly animals include an enlarged pituitary gland or a pituitary tumour which can cause the adrenal gland to release abnormal amounts of cortisol into the bloodstream and increased levels of cortisol often leads to the animal developing Laminitis.

Stress
Any stress such as overworking unfit horses, prolonged travelling in hot (or cold) conditions, may result in laminitis in some animals.

Heat in the feet; is a very unreliable diagnostic indicator. Foot temperature normally varies throughout the day. 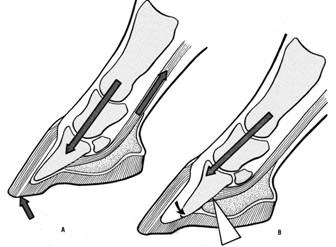 The downward force of the body weight is neutralised by the resisting force of the ground. The primary forces involved are the pulling force of the deep digital flexor tendon, and the tearing force at the junction of the white line and the sole.

The condition is always life threatening, there is no such thing as a “touch” of Laminitis. Therefore Veterinary advice should be sought immediately. Usually, non steroidal anti-inflammatory drugs will be prescribed, in conjunction with frog support, along with the removal of the cause (if known).

Farriery treatment normally follows the abatement of the symptoms and fresh x-rays are advisable to locate the true position of the bone inside the hoof capsule.
A heart bar is my shoe of choice, usually made of steel or an alloy and nailed on lightly. This shoe offers stability to the bone column of the leg and hoof.

New technology allows us to glue hydroplastic heart bars to feet, should nailing prove too traumatic.

Laminitis does not just affect the front feet. Although due to 65% of bodyweight being carried on the forelimbs, the front feet are usually more badly affected.

The correct method of application of a Heartbar is crucial to the recovery of a Laminitic animal. This should always be done with Veterinary consultation.

Current x-rays are essential in positioning the shoe correctly.

The shoe is designed so that the frog carries a significant proportion of weight that would have been normally supported by the wall and sole; especially at the heels. The Farriery term for this is a loaded Heartbar.

The bar in the shoe replicates the triangular shape of the frog, and lays flat on it within its perimeter. The tip of the bar must be perpendicular to a line drawn from the Extensor Process of the Coffin bone within the hoof capsule. The drawing pin shows the true point of the frog, giving an external reference point..

If the bar in the shoe is positioned too far forward the arterial blood supply to the Laminae and sole will be compromised usually resulting in an abcess. If too far back the tip of the bone is driven downwards and can protrude through the sole.

The x-rays will not only show the current position of the Coffin bone in relation to the hoof capsule, but can also show any pockets of serum which have filled the void created by the dead Laminae.

When fitting a loaded Heartbar any serum or gas pockets should be opened to release the Hydrostatic pressure within the hoof and offer relief to the horse.

It should be remembered that this breakdown of the Laminar bond occurs in three dimensions. Often the bone will displace medially due to the centre of weight bearing being carried down the inside of the limb.

When turning in a tight circle is not problematic the heartbars may be removed and replaced with shoes which don’t impede the distended laminae at the toe ie.either unclipped or side clipped shoes.