Jim, and his brother Allan, started J&A Ferrie in 1982 shoeing all types of horses and supplying farriers with shoes and nails, they also both lecture and give forging demonstrations worldwide. Here, Jim provides detail of he deals with cracks in the hoof and how they may occur in the first place.

"I am often asked to “fix” cracks in horses’ feet, and usually the owner perceives that it is just a case of trimming the hoof and gluing or screwing a plate to the hoof and the crack will grow out, nfortunately in reality is a lot more complex than that.
To understand how to correct cracks we must first understand the anatomical structures which are involved.
The horse is held in suspension by the laminar attachment between the Coffin Bone and the Hoof Capsule. 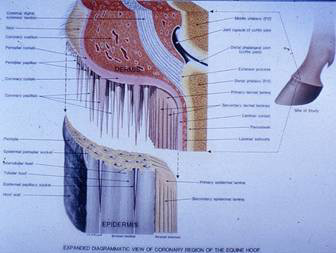 The Hoof grows from the Coronary Band downwards and growth is reliant on nutrients being supplied by the Arterial blood supply and subsequent diffusion through the capillary beds. The Coronary Band is comprised of Papillae each of which is responsible for the nutrition of a horn tubule, it is from here that the horn cement or Keratinisation process occurs giving the hoof its hard yet elastic structure.

The outer portion of the hoof is known as the Wall, and it is here that cracks generally occur. The common names for a crack in the Wall is a Sandcrack,or a Grass Crack - these terms have evolved over the centuries and are easy to remember. Many Farrier text books state that Sandcracks start at the Coronary Band (top) and GrassCracks start at the Distal border (bottom). Personally I don’t allude to these terms, and think that Cracks are Stress Fractures of the hoof, and will usually occur where the hoof is longest. Cracks can be categorised by their position within the Hoof Capsule; Toe Crack, Heel Crack, Quarter Crack or Bar Crack

In this article I will give some of the causes of cracks that I have come across and show some methods which I have used to treat them.

This is by far the most common cause of cracks of the Hoof.

During locomotion a balanced Hoof Capsule is essential for shock absorption and fluent blood flow. Should the hoof be excessively out of balance then upon landing on a firm surface abnormal load bearing will transfer excessive force to the Coronary Band, causing a disruption to the keratinisation synthesis.

It only needs one papillae not to nourish a Horn Tubule for a second to start a crack.

Alternatively in overgrown feet a stone trapped between the junction of the sole and the wall will have the effect of driving a wedge into the hoof causing it to split from the bottom.

The treatment in this case is relatively simple, just have the Farrier trim the hoof, relieving the ground pressure from the base of the crack and in most cases where the Coronary Band has not been severed a full recovery is normal if regular trimming is now adhered to.

Abnormal conformation is a primary cause of hoof cracks. Either Angular Limb deviations or Joint Rotational problems will cause the leg to move forward abnormally .This is commonly known as “Dishing “or “Winging”, if we consider the leg as a pendulum ,then the hoof on the end will be moulded to suit the load placed on it from above and will migrate inwards ,outwards away from the direct load. These animals are often referred to as Pigeon Toed or Splay Footed, when in fact the problem is at the knee or fetlock.

Should the hoof not be trimmed to facilitate a flat, level footfall then even a prolonged trot down the road or a canter in a firm field can lead to a crack developing, usually between the middle of the hoof and the heel as the horse lands on the high side and loads excessively on the other. This is known as a Quarter Crack

In Conformational related cracks, trimming and shoeing to achieve level footfall is fundamental. With a slight Lateral (outside first) landing pattern being generally the accepted norm. Trimming in such a manner often leads to the hoof capsule initially not being trimmed to what is deemed to be aesthetically pleasing to allow for normal landing and loading, and the Farrier should explain this to the owner.

Abcessation,Treads,Overreaches and other acute Trauma’s to the Coronary Band

As explained in previous paragraphs any disruption to the blood supply of the Coronary Band will result in a Hoof Crack. Should the horse tread on itself, or as was more common in the days of Carriage Horses another horse did the damage, a crack will be the result. This will often take the form of a longitudinal split running the length of the wound and whilst being very painful and bloody initially, will normally heal quite well. Veterinary treatment is required for these wounds, to determine that there is no foreign body trapped in the hoof and administer painkillers and often antibiotics.

Generally after the initial wound has healed the split will grow down the hoof causing no problem. Exceptions to this are when the crack has grown down and is long enough to be crimped together during load bearing thereby tearing the hoof away from the bone within. With modern hoof glues the Farrier can join top and bottom together allowing normal pain free work.

Should the Coronary Band be cut right through (severed), then the condition is called a False Quarter regardless of where the wound occurs on the Coronary Band. The prognosis for this is guarded as the new horn which grows does not have the same Keratinsation properties as before and may be prone to abscess.

After the hoof has been trimmed to accommodate the limb conformation, my shoe of choice would be a Heartbar. This is a shoe that when properly applied, taking account of the sensitive structures within the hoof, will stabilise movement at the Coronary Band.

It must be stressed however that restricted turnout is advised along with keeping the horse on as flat a surface as possible. If the animal is allowed free range, especially in soft conditions the upward pressure on the sole causes movement at the site of the crack keeping the healing cells apart.

It is important for a prospective buyer to be aware that although they have the best Farrier in the land that can stabilise all cracks, long standing cracks can do irreparable damage to the Coffin Bone inside the Hoof. This is due to the constant tearing of the Laminae from the bone during weightbearing. While they will be fixed externally, dramatic internal bone erosion may have occurred and I would always advise an x-ray is such cases."

For further information you may contact Jim at sales@j-aferrie.com