Despite the early autumnal feel The Horse Trust’s Home of Rest for Horses provided the picturesque location for the Stromsholm Clinic ‘Managing and Preventing Flat Feet’. Following a warm welcome, by Managing Director Carl Bettison, to approximately 40 farriers, apprentices and paraprofessionals the half day clinic began with theoretical presentations on the latest research. 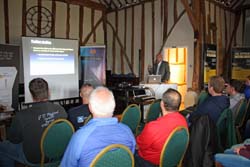 Those that know Steven will be aware that perseverance has paid off. The journey to him gaining his Fellowship has not been one without its challenges but the results underline the importance of exploring  the relevance of historically accepted concepts in modern day practise whilst having the commitment to undertake the methodical, scientific research without which farriery would not move forward.

His investigation into ‘dorsal rounding’ was borne from recognising weakness in hoof walls and a comment made to Ian ‘Spud’ Allison who alluded to ‘dumping’ to help retain strength in the hoof wall throughout the shoeing period. Steven had noted raised clenches and a decrease in hoof condition in addition to the hoof walls appearing to have ‘run forward’. A subsequent literature review showed that many of the current theories on hoof trimming allude to proportions and symmetry from work cited in the 19th century.

The role of the hoof wall, including its load bearing capabilities and visco elastic properties, was discussed. The hoof was referred to as an arch – of which there are many landmark structures of this shape that withstand enormous weights – and that the sole flattens during loading and the consequent migration of the dorsal toe which has the capacity to compromise this structure. Subsequent research explored alternative trimming and shoeing protocols including the ‘mustang roll’ (a heavy bevel).

Steven’s data for his Fellowship thesis was undertaken over a period of 10 months where a ‘double cross over’ study was undertaken in a group of horses whose management, age, type and workload were similar. Each horse acted as its own control and two methods of trimming were used; one on the left front foot and one on the right front foot. One side was trimmed according to the ‘National Standard’ and the other “rounded back” to 10% of the wall thickness (as when the foot is trimmed flat perpendicular to the ground it increases the wall thickness at the distal border by 10% as it is said to grow parallel from the coronet). The shoes were unclipped, handmade by Steven and of a ‘leisure’ fit. They were shod cold so that hot fitting would not impact on the results. Linear hoof wall and solar depth measurements were taken (with the use of  liquid urethane impression).

Whilst acknowledging the comparatively small sample size and the opportunity for a bias due to the work being undertaken by one farrier, Steven confirmed that further research is warranted. He believes that different trimming techniques can affect the mechanical behaviour of the hoof wall and under certain conditions can lead to a loss of integral strength. ‘Dumping’ the hoof wall, and creating a curve, appears to have a beneficial effect on the overall health of the hoof.

An appreciative nod was provided by the audience as the proposed method was considered. Steven concluded by underlining the need to treat each horse as an individual and that dorsal rounding can be applied at varying degrees; radical, moderate and slight, depending on the many factors that influence trimming and shoeing protocol.

Measuring the effects of hoof packing on the hoof capsule

The ‘effect of sole packing material on dorsal hoof wall vibration’ is an area currently being examined by Amy at the Royal Veterinary College as part of her PhD. Studies have shown that high frequency vibrations are indicated in changes in bone pathology and potentially lameness, loss of performance and catastrophic injury. Much work has been done on the surface on which we ride horses in order to reduce these vibrations which occur during the primary impact of the foot on the ground; the firmer the surface the greater the risk of catastrophic injury.

Whilst an intervention may be available in the surface on which we place the horse, Amy acknowledged that the shoe may also be adapted – an easier solution for many riders. Previous studies have shown that plastic shoes, for example, can decrease the frequencies but may not necessarily be suitable for other reasons such as surface and longevity and she designed a study which maintained the use of the steel shoe.

Using three shoeing methods; unshod, steel shoe and steel shoe plus packer, 6 cadaver legs were placed in a custom built device to simulate movement at a high velocity (equivalent to a slow trot). The vibrations were measured parallel and perpendicular to the hoof wall using an accelerometer. A further study in live horses which were either shod with or without packer and trotted in hand on a firm surface.

Amy concluded by suggesting that sole packing materials may help with shock absorption but that her data analysis is ongoing. 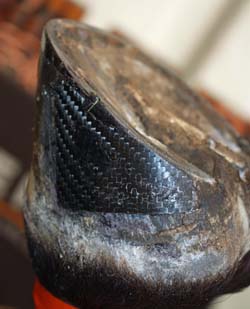 Many of the cases seen by Peter at the RVC have collapsed and/or underrun heels. Wear and tear, genetics and conformation lead to a predisposition to horn tubules bending leading to collapsing, bruising and the subsequent loss of performance due to lameness and heel pain.

Tactics may include a number of methods including a broader shoe, a bar shoe, buttressing of the heels, natural balance shoes and a cuff cast amongst others. Peter considers prevention to be better than cure and providing support to these susceptible horses prior to the problem occurring may promote longevity of their career and increase comfort. His aim was to prevent the ‘kink’ and loss of compression in the horn tubules and presented the ‘DuraHeel’ as a potential aid.

This carbon composite support adheres to the heel of the outside of the hoof wall and is shaped to fit to the natural curve of the hoof. Peter’s research exposed the DuraHeel to –

a ‘four point bending test’ which was a measurement of the bending stiffness of the hoof wall with and without the carbon composite of different thickness,

perfusion tests to examine the blood flow in vitro in cadaver legs,

hoof deformation with 8 cadaver limbs with collapsed heels and,

an in vivo trial with 6 thoroughbreds with collapsed heels over an 18 month period with 4 to 5 week shoeing intervals.

His findings have demonstrated –

the carbon composite could increase the hoof wall bending and should work in function with the foot,

no significant differences in hoof deformation between the carbon composite patched and unpatched cadaver limbs but the patched appear to provide a “strengthening approach” and,

no significant findings in the in vivo trial with 6 thoroughbreds.

Peter’s work has demonstrated that DuraHeel are a practical application that may influence hoof deformation and can change stiffness and alter perfusion. The application of this carbon composite patch is one of slowing down or preventing the collapse of the heel and is to be used in horses ‘at risk’ to increase horn tubule strength and improve hoof deformation.

Following a short break, and a chance to grab a coffee, the afternoon recommenced with the practical sessions. 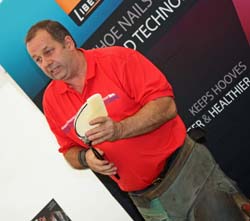 Alf provided a practical demonstration on a cadaver limb of the application of his EFC Heel Support Pads. Available in both flat and wedged versions Alf has had numerous successes with the application of these pads. Indicated in their use for both front and hind feet to increase comfort, load the frog, unload the heels, relieve heel pain and to encourage the foot to function as if it were unshod, these pads are flexible and fit cold. Preparation of the foot includes a trim to “open the heels right up” and the shoe is fit with the clips not cut in but sat against the side of the wall.

Alf has clients who compete successfully jumping, eventing and on the all-weather but advises against use of the pad in muddy conditions and it should not be used on unclean frogs. He states a preference for not using dentist impression material. Many of the horses fit with these have shown to increase sole depth, he believes due to the fact that the foot is allowed to function normally.

Every day shoeing and the application of emergency frog supports

Steven’s everyday shoeing has evolved to become a more thorough examination of the horse prior to shoeing, described as he sees it as “the time you learn” and also cites the importance of working with both the owner and the vet. He regularly uses the ‘Coaches Eye’ app to record and analyse movement and his assessments are now always dynamic and not just static; in his opinion the ‘damage’ is done during the “landing phase”.

Stating a preference for even proportions and symmetry he does not class himself as a “foot mapper” but does examine around Duckett’s Dot. His assessment takes in a view of the whole horse, “everything done to the bottom affects something higher up”. Steven believes that excess length is leverage and will not “scalp feet”. Whilst not a “massive believer in pads” he does apply “flotation devices” which are typically hand made by himself for the job. Any alteration to the shoeing of an individual is generally done in the winter season and tries to avoid it during the competitive months. 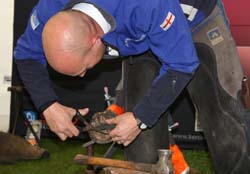 His recently launched Frog Aid First Aid Support System has received an overwhelmingly positive response from farriers and veterinarians. Borne from first-hand experience of many laminitis cases, Steven believes, as do many of his peers, the quicker that emergency first aid can be provided to a laminitic the better the likely outcome both in the short term to relieve pain and in the long term. Frog Aid is manufactured from a waterproof and breathable compressible material that is triangular in shape to fit the frog. The Velcro backing allows for multiple Frog Aids to adhere together to apply increased pressure and additional support as they compress (40%) over time. Once applied and trimmed to fit the frog it is held in place with a bandage, taking care around the coronet band to avoid it becoming too tight. Once the foot is placed on the floor the Frog Aid will mould to the frog and should provide immediate comfort and relief.

Following on from his earlier presentation, Peter demonstrated the application of the carbon composite DuraHeel.

Preparation of the hoof prior to application is essential and the foot should be absolutely clean and dry; Peter advocated the use of a heat gun if necessary. The heel area is rasped to provide a smooth surface and Vettec Adhere “buttered” to the inside of the DuraHeel before positioning and taping firmly in place. ‘Smoothing over’ the tape once in place will push out any excess Adhere. Peter finds that once he has taken care of the hind feet, or attended to a different horse in the yard, the Adhere is dry enough for the tape to be removed and the DuraHeel should remain in place throughout the shoeing cycle, if not longer. The patch should not be placed over a nail or near the rim of a shoe. 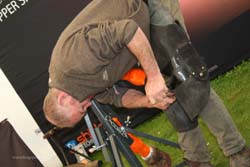 Peter stated a preference for replacing the DuraHeel at the next shoeing and that they can be removed easily with a blunt ‘bench’ rasp. The more work a horse does the more the carbon composite support will degrade.

The speakers were warmly thanked by both Carl Bettison and all attendees who had received an informative and thought-provoking clinic. With the mutual aim of preventing and managing flat feet, all attendees had been provided with ideas for different approaches to fulfil this everyday challenge. A worthwhile and educational clinic for all.

Go back to the previous page