Welcome to the page dedicated to providing you with everything you need to know about the 2014 European Farriery Championships! In Austria in 2012, Henrik Berger successfully secured the title ahead of Reserve Champion Gert Yan Salm. 2010 European Champion David Varini was in third. A terrific competition, showcasing incredibly talented farriers across Europe - who will win the title in the UK in 2014?

We are absolutely delighted to have secured the services of two highly regarded Judges for the 2014 European Farriery Championships. Our thanks to them for accepting the invitation, the time taken to make the Specimen Shoes and for joining us at the Championships. 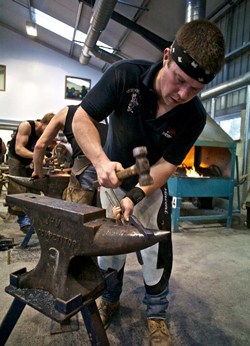 Vincent completed his training to become a farrier in 2004, prior to this he had worked in a sports horse stables.

Once he had graduated he began to compete in open farriery classes with a great deal of success – Vincent became Belgian Champion in 2008 just four years after qualifying! He has continued to compete across many countries and notable wins include becoming winner of the French Cup in 2010, 4th in the ‘Individuals’ at the International Team Shoeing Competition at Stoneleigh, UK and 20th in the World Blacksmith Championships in Calgary.

Vincent has a dislike for boring customers but cites getting horses sound and promoting good feet as being a particularly rewarding part of the job. Notably, Grant Moon AWCF, is a main source of inspiration.

In time away from shoeing horses, Vincent is a keen follower of showjumping.

Aksel grew up on a farm and has been with horses, and wanted to be a farrier, for as long as he can remember. In his current practise a large majority of his cleints are showjumpers and dressage horses.

Amongst his inspirations Aksel sites Richard Ellis, his team mates from Calgary 2013: Jesper Ericson, Jonathan Nunn and Grant Moon and his son William.

Whilst he doesn't like clients that don't respect their horses and the job farriers do for them he finds farriery at its best when he 'gets back what he puts in'.

*This is a provisional timetable and may be subject to amendments.

Click here to download rules specific to the 2014 European Farriery Championship. Please note these rules are provisional and will be subject to amendment. Updated 31.05.14

Please note this is a provisional list, correct at 6th June 2014, but may be subject to amendment.

Thank you to Tom Ryan for preparing these so early. This timetable is provisional and may be subject to amendment.

In addition to the prestigious title of '2014 European Farrier Champion' we are delighted to confirm prize money of £1500 for first place and a further £1000 to be split between 2nd and 3rd place.

The winner of the five qualifying classes will each receive £100 cash courtesy of Londonderry Forge Supplies.

The first, second and third placed Competitors in the hoeing Class will receive a 500, 350 and 150 Euro voucher respectively courtesy of Werkman Horseshoes.

Furthermore we have the following contributions to the prize fund confirmed  –

Steve is friends with many farriers and is a regular at farriery competitions and social functions. Photographs taken at the competition will be available to purchase.

We are extremely fortunate to have within our industry some of the most supportive, loyal and generous companies. We are indebted to them for their support and we thank them for their sponsorship. It is not a cliché; without our Sponsors this event would not have gone ahead.

Please take the time to visit our Sponsors page to acknowledge each and every one of them.

We are looking forward to welcoming as many spectators as possible to watching the European Farriery Championships! We respectfully ask that all spectators remain behind the public barriers and do not communicate or interfer with the competitors in anyway.

Your safety is important to us. Safety glasses and ear defenders will be provided and you are asked to wear these as appropriate when watching the Championships.