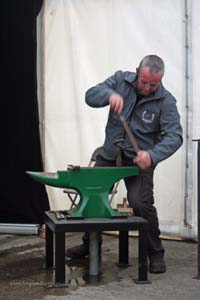 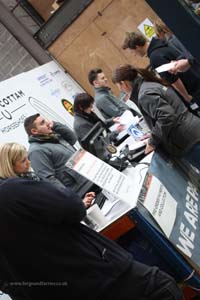 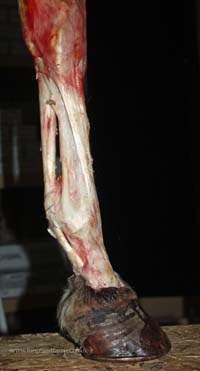 The Arthur Cottam (Horseshoes) Company Ltd Open Day did not allow wind and rain to dampen the spirits of the 200 attending farriers, farriery apprentices and guests. Met with a warm greeting from the Cottam’s team and an impressive display of horseshoes and tools, the day kicked off with a lecture from farrier Paul Conroy.

Paul Conroy successfully completed the BSc (Hons) in 2010 and was amongst the first group of graduates from the new farriery qualification. Paul teaches at Myerscough College, and chose to focus on navicular as it is seen frequently in every day work and wanted “to challenge and focus the modern farriery options for treating the disease”. The morning presentation focused on the pathology of the disease and what actually happens to the anatomy in that area. This was followed by a comprehensive insight into the current vet and farriery treatments.

Following a short break, Paul demonstrated the modification of a machine made shoe to provide "speed on the job", without the need for specialist shoes, plastics and fillers. Focusing on the thought process behind the mechanics of the shoe the 7/8" x 7/16" concave shoe, used from Cottam's own range, demonstrated the easy and effective  adaptation of a horseshoe, suitable for a horse with navicular syndrome.   With the heels "fit as normal according to the shoeing cycle" but mimicking the angle that the heels are naturally worn, a slow graduation to the toe was forged, leaving the inside edge of the shoe higher than the outside. With the underlying aim to "reduce the impact" and "get the momentum moving forward" an area of flat is left after the last nail hole. This shoe differs from a rocker bar in that the flat surface continues the forward momentum. The shoe is then linnished or rasped to finish before shaping and fitting. Paul advised that this particular shoe would be more suited to a hard surface and that it should be “fit to (toe) clip”.

Following a tasty barbeque lunch, heartened by an opportunity to capitalise on the wealth of farriery products and offers and a good catch up with friends and colleagues, Professor Renate Weller kick started  the afternoon session with a look at "the miracle of bioengineering" (or "really stupid design”) of the horse. Renate does not fail in her lectures to both humanise and humour her subject. With an examination of the performance greats Usain Bolt, Mo Farah, Frankel, the camel, peregrine and cheetah, the performance of the horse was considered as the “ultimate athlete and a miracle of bioengineering”.

Renate walked us through the structure of the horse that facilitates this performance; legs that may be seen as pogo sticks, expensive muscle contraction, the catapult mechanism of the front limb and the respiratory coupling aided by the huge gut system. Athleticism doesn’t come without its price and whilst fracture incidence in the racehorse may be deemed to be relatively low at 1 – 2% it is considered that 50% suffer from tendonitis. It is estimated that the front limb of the horse can experience forces of ½ its bodyweight at walk, 1 times its bodyweight at trot and a terrific 2 ½ times its bodyweight at a canter – whilst elevators are deemed to have a safety factor of 5 to 10 times the displayed maximum load, the safety factor of the horse is closer to 1 ½ to 2 times! The horse’s ability to dissipate this impact should not be underestimated and consideration was given to the effect that the type of material used in a shoe may have. Hoof pack, toe length and the part of the foot landing first was also discussed.

Following on from Renate’s enthusing discussion, Amy Barstow provided a detailed dissection of a pony forelimb. Amy is a vet and PhD student at the Royal Veterinary College (RVC). The structures were described in detail and examples of the pathology that may affect them were given to deliver an understanding of the mechanics of – and risks exposed to - the limb. Amy followed later in the afternoon with a look at her own area of research which is examining the use of packing materials with a steel shoe in the context of “impact shock”.

Peter Day DipWCF has provided farriery services part time to the Structure and Motion Laboratory for in excess of 20 years. Peter provided an insight into the role of the farrier in equine research. He described his involvement from both a farriery and “skip surfing”(!) practical point of view and the vast range of interesting projects he has become involved in. Welfare and performance are the two main initiators for a project to begin and he invited the audience to give consideration and share the issues they came across and had concerns or ideas about.

Jamie Judd is a final year veterinary student at the RVC and provided a summary of the work undertaken by undergraduates including the effect of different shoes with and without pack on tendon strain. The work involved loading legs to 6000N (the equivalent of a fast trot) and the finding (amongst others) demonstrated that an aluminium plate with pack behaved most similarly to the unshod foot. Other work is needed to look further into different surfaces.

Renate summarised the afternoon with an invitation to farriers to consider what work they would like to investigate. It was wholly agreed that research at the Structure and Motion Lab cannot happen without farriers and, that prevention is better than cure. Farriers are at the forefront of hoofcare and it is only natural that their ideas should lead the direction of further study.

With an abundance of information provided to rouse ideas, the day concluded on a stimulating and inspired note. Cottam’s were delighted to have welcomed so many existing and new clients and would like to thank all who attended. 2016 is an exciting year for the family business as it enters its 90th birthday; we join them in looking forward to the year ahead.

The full photo gallery can be viewed by clicking here.

Go back to Articles by Forge & FarrierArticle Library